The Importance of Rehabilitation for Healthy Ageing 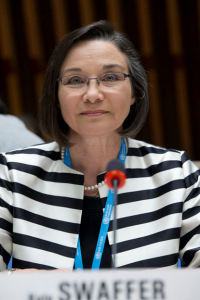 As a 49-year-old, married, working mother of two teenage sons, I was initially in deep shock when I was diagnosed with younger onset dementia. Even though I had been a nurse in a dementia unit, I had no idea younger people were diagnosed with dementia. Eleven years on, a lot has happened in the field of dementia, including activism for a rights-based approach and access to the Convention on the Rights of Persons with Disabilities (CRPD).  Despite my increasing disabilities, I am still living beyond dementia.

Following diagnosis, I was advised by health care providers and an advocacy organization to “get my end of life affairs in order, to give up work, give up study, and to start attending aged care respite a day a month, to get used to it.” I’ve since Trademarked this as Prescribed Disengagement® [1-2]. Dementia is the only medical condition I know of, where people are not supported to live for as long and as well as possible regardless of the prognosis.

Not one health care professional or advocacy organization advised me dementia is a condition causing cognitive and other disabilities, albeit progressive, and none supported me to live with it using a rehabilitative or disability approach. My university, thankfully, taught me to see the symptoms as disabilities, and even today, still provide me with disability support to continue studying.

Self-prescribing a brain injury style rehabilitation and finding health care professionals who were brave enough to support this has paid huge dividends as I continue to maintain ways to function. It includes physical rehabilitation such as neuro physiotherapy, increased exercise, speech pathology, hydrotherapy, occupational therapy (not just to support my activities of daily living, but actual strategies to support my increasing disabilities), and many other interventions such as improved diet. This approach also reduces my risk of falls and many other comorbidities, therefore also contributing to improved health and well being in general.

Professor Dale Bredesen and others are showing early results of even reversing early Alzheimer’s disease or Mild Cognitive Impairment through lifestyle changes [3].  As I had done many years before, I decided it would be better to continue to live every day as if it is my last, just in case it is, rather than worry about the end stages of dementia. I’ve become an accidental global activist for people with dementia, and whilst I still have breath and can use my voice, I will stand up for our rights, and those of our families.

In 2015, the Organisation for Economic Co-operation and Development (OECD) report Addressing Dementia: The OECD Response [4] concluded, “Dementia receives the worst care in the developed world”. This is abhorrent, and as an activist for human rights and access to the CRPD for people with dementia, it is my goal to ensure global change. As a co-founder and the current Chair and CEO of Dementia Alliance International [5], a global organization for people with dementia now in 49 countries, our members are also asking for this change.

Lack of focus on risk mitigation will also herald an economic cost that not even the rich developed countries are currently able to afford, and the human cost to this on healthy ageing will be profound. The medicalization of dementia, and enduring view of dementia through a 20th century lens, ensures increased dependence and disability. Since the World Health Organisation has clearly defined dementia as “one of the major causes of disability and dependency among older people worldwide” [6], it is clear the time is now to not only see it this way, but to manage it as a disability, and to support independence and functional capacity for as long as possible.

Personally, I have never had a dream for a ‘dementia free world’ as I believe that is unrealistic, and many others diagnosed with dementia feel the same. Whilst we would all like a cure, we want better care, which includes rehabilitation and support to live with dementia, not only to go home and wait to die from it. 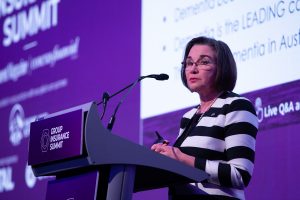 Although dementia is not a normal part of ageing, our risk increases as we age, and I believe it is only with a rights-based approach, where human rights are embedded in national dementia plans (including rehabilitation and reablement), that we have any chance of ensuring healthy ageing for all.

Consider attending the IFA 15th Global Conference on Ageing “Rights Matter” where the importance of functional ability will be discussed in the context of brain and cognitive health under the theme “Enabling Functional Ability.”